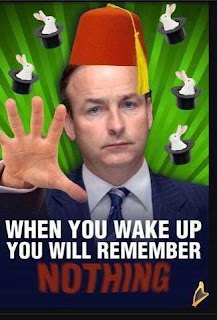 To those who can't stomach the idea of voting for a government party I have a plea: vote for anyone — literally anyone — other than your local Fianna Fáil candidate. You kicked them out last time. It would be a big mistake to leave the door open for them to come in again.
Posted by Noses to spite faces at 21:29 No comments:

Newer Posts Older Posts Home
Subscribe to: Posts (Atom)
Yet another blog on the relationship between philosophy, religion, the media, politics and culture. In this case the concentration is on Ireland. Ireland being Ireland, and me being an aggressive secularist, you'll find there's a lot in it on religion. I'll try not to be too grumpy.