The following article is slight adaptation of something I put together and did the rounds with a few weeks ago (namely during Easter Week), when ace philosophical poseur, John Gray, was commissioned not one but two full-length opinion pieces in the Irish Times. It wasn't published in The Irish Times or anywhere else.

Now it may be that I can't write (please let me know if this is the case), but since no other article was later published to rebutt the poisonous tripe contained in the two Gray efforts, I feel the whole episode illustrates my previously expressed contention that people are allowed write any calumny they like in the Irish print media (and particularly in the Irish Times) without having to concede right of reply to those they insult, just as long as the lie is written for the benefit of 'belief'. 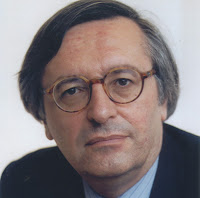 The flurry of anti-secular aggression written under the cover of Easter week in the Irish Times is illustrative of the level of absurdity that the debate on the role of religion in society has reached in Ireland. In holy week British celebrity philosopher, John Gray, had not one but two opinion articles hostile to atheism in the Irish paper of record (as usual, you may need to pay your dues to Geraldine to get these links to work). As well as his efforts, our own home-grown scourge of the secular, John Waters, put his oar in, as did Roman Catholic Orthodoxy’s defender of the faith, Breda O’Brien. And what was there in reply for the non-religious? Not a column inch outside of a single rather mild letter to the editor on Easter Saturday.

Blood libel
In his book-length rant against the Enlightenment, “Straw Dogs”, Gray rolled out the old blood libel that has become a weapon of choice for anti-secularists everywhere: i.e. that atheism was at least partially responsible for Nazism. He repeats this ridiculous accusation in the first of his IT articles. (Incidentally, this nasty piece of propaganda was since repeated without a squeak from the media by the Benedict during his visit to the US.) No argument does Gray present apart from the earth-shattering insight that the Nazis foully perverted the discoveries of Darwin to justify their extraordinary savagery.

Gray (and, shamefully, Benedict too) seems to know very little about the history of Nazism, which owed as much to pagan and Christian religious traditions as it did to atheism. Indeed National Socialism’s ideology was informed more by nostalgic anti-enlightenment romanticism than ever it was by any great enlightenment philosophers, as any study of proto-Nazi movements in 19th and early 20th Century will clarify. Indeed it seems it was mainly this Nazi yearning for a non-existent past that attracted the philosopher Heidegger to the ranks of the Hitler’s party (though ambition also surely played a role). It’s ironic now that the same Heidegger is one of the two or three world philosophers most cited by the Irish religious intelligentsia as leaving open a space for religion in a post-enlightenment world.

Schoolyard taunts
Gray’s case against memetics is even worse. Memetics is Richard Dawkins' exploration of the relatively modest and thought-provoking idea that genes may not be the only information storage systems in the world that both affect human behaviour and are capable of reproduction and variation, and are therefore also subject to their own evolutionary pressures. Cultural change, suggests Dawkins, may also be fruitfully be analysed in a similar way, where the concept of genes is replaced by what he calls "memes", which we are to interpret as ideas, opinions, beliefs and other mental artefacts that may be more or less effective in reproducing themselves via communication between human minds. Gray doesn’t even bother to argue with him. Indeed his attack is little more than a series of schoolyard taunts.

In fairness, maybe Gray is responding to Dawkins’ unfortunate metaphor for “memeplexes” (including religious memeplexes) as “viruses of the mind” (this expression has indeed led to much misunderstanding – especially when some of Dawkins’ other undiplomatic pronouncements are added to the mix). However, in neither his books nor his newspaper articles does Gray let us in on his reasoning on the merits of the theory. He limits himself to thumbing his nose at it.

Religions don't make factual claims - Gray
Gray also informs us (amid a diversionary swirl of intellectual-sounding verbiage) that religions do not make any claims about how things are in the world (apparently only “some western Christian traditions under the influence of Greek philosophy” do that), and accuses his scientific opponents of refusing to acknowledge this factoid. He doesn’t mention the oft-repeated assertion by Dawkins that any religion that avoids making such supernatural metaphysical claims is ok with him.

Self-confessed Gray fan John Waters, in his Good Friday article, accidentally illustrates the absurdity of Gray’s position, at least in an Irish context. In time-hallowed, Greek-influenced, Christian tradition, Waters makes the claim that the Resurrection of Jesus was an historical fact. (“… Jesus became, once again, as alive as we are. … This, too, is history”.) ... Well, ahem, on the contrary, a newly released book – “The Resurrection” by biblical scholar and historian Geza Vermes – eloquently argues the already obvious fact that the story in St. John’s Gospel was nothing more than a myth.

Whether or not Vermes is right (and he clearly is), Waters is repeating a (perhaps the) central factual claim of the most influential religion in Ireland. The assertion (to adapt some of Gray’s phraseology) is obviously a proposition struggling to be accepted as a fact. Like any other historical assertion, it must therefore stand or fall on the basis of evidence. In short, nobody has a problem with the Resurrection story as an allegory, but as an historical claim it requires evidence (and, being an extraordinary claim, it needs extraordinary evidence at that).

So, does Gray support Waters’ assertion? He should be forced to answer the question clearly. Does he support the legitimacy of such claims as that Resurrection actually occurred? If his answer is yes, then his argument falls apart immediately, as this is almost the prototypical example of a religion making claims about objective historical fact. If it is no, then Dawkins and others have no beef with him. And there simply isn’t room for a maybe. Either it happened or it didn't.

The myth of anti-religious bias
RTE and the Irish Times are often accused of having an anti-religious bias. Yet the Irish Times provides a pro-religious opinion piece every week (Rite & Reason) which rarely or never invites non-religious contributors. The paper also routinely provides regular space for predictably pro-religious commentators (such as O’Brien and Waters) and yet provides effectively no counterbalancing space for opposing views. In this context, the Holy Week articles were fairly typical of the Irish Times editorial approach. Of course and as usual, RTE provided full coverage of a variety of religious events during the week, reported uncritically on the religious pronouncements of a variety of religious and political leaders. Both organisations clearly have a de facto policy of ensuring that non-religious writers refrain from articulating views critical to people’s religious beliefs (this policy is possibly especially strongly enforced in the time leading up to Easter and Christmas, but clearly applies all year round).

The bias in the Irish media that religious commentators never tire of complaining of on religious matters is obvious to anyone who makes the effort of looking. However, the articles printed in Holy Week 2008 in the Irish Times neatly illustrate the point that this bias is by no means against religious world views. On the contrary, the imbalance is very much against non and anti-religious views, and is largely based on a fear of offending religious sensibilities. Sensitive as the print media are to the feelings of the religious-minded, they seem completely indifferent to the devastating effect their self-censorship has on the freedom of expression of what John Gray calls “proselytising secularists” – i.e. people critical of religion who are unwilling to be shut up.


For an excellent critique of Gray's nonsense, have a look at A.C. Grayling's article on the New Humanist Website.
Posted by Noses to spite faces at 08:40

Apologies, if that is not your name :)

I must confess to not taking much notice of the religious in Ireland. I have been focusing most of my attention on the fundamentalists in the U.S. After Bertie's recent comments (when we was sucking up to a gang of bishops) and a few other minor warning sings, I think I should probably take more heed of proceedings on the home front.

By the way, I have been meaning to link several sites from my own blog, this one included. If I don't get a link up soon, give me a smack upside the head to wake me up. I am tremdously lazy about blog upkeep. :)

Thanks for taking the time to read the post. For what it's worth, I think it's important to attack US-style fundamentalists, but it's relatively easy.

Harder to deal with is the sort of slippery, now-I'm-being-postmodernist-now-I'm-not nonsense that modern relatively liberal christianity spouts in Europe. It's not as dangerous as the fundie stuff, but it provides cover for the sort of nonsense that the mainstream catholic church comes out with. And mainstream nowadays means opus dei.

If you're interested in more on the subject, have a look at this post (if you haven't already done so).

Hi there, I'm liking the blog and burning with jealousy that you don't have to live in this bloody kip. Carry on...